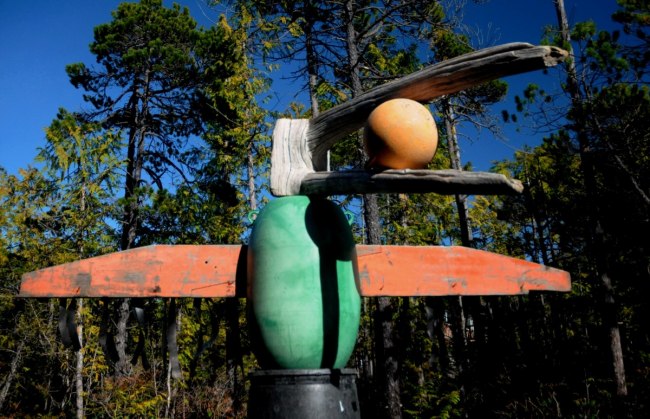 * Click on the small square thumbnails to view larger images

Large plastic barrels and floats, such as those in the Float’em Pole, commonly wash ashore along the BC coast. I was keen to use them in my work but challenged to come up with a practical way to incorporate them. I decided on a totem-like structure for a number of reasons – they are an an iconic coastal First Nations art form in BC; they are monumental and command attention; they can have many meanings; and they provide an art form that allows me to incorporate a number of large debris pieces in an aesthetically pleasing way.

Creating a totem pole of debris first captured my imagination about 5 years ago. Plastic barrels have become a highly visible indicator of marine debris in the past decade. They come from many sources (aquaculture, liquid transportation, food processing, manufacturing, etc...). I wanted to incorporate them into my work and liked how they looked stacked up together. Stacking was also a practical way of presenting them and visually encourages the viewer to consider them in a different way.

I've always been inspired by Northwest aboriginal art and it's had a prominent influence on my art. A sense of place ( and humour) is also important to me so it felt very natural for me to reexamine one of British Columbia's most iconic images, the totem pole. It took a number of years to find all the right material. I found the basketball base on Clayoquot Island, and immediately envisioned the "frog" like outline in the molded plastic. I had no idea what the thing actually was but knew I wanted it for the totem. It wasn't until about a year later that a friend of my son's recognized it as a portable basketball base used on driveways. How bizarre to find it on a beach? Basketball is really popular with the local First Nation kids, so it may have come from one of the coastal communities.

The black & yellow float was the final piece I needed. It might have come from  the Japanese Tsunami, which became the catalyst to complete the project. I was on a boat in Prince William Sound, Alaska at the time of the tragedy and watched the news in horror. I couldn't contact my family in Tofino but knew they'd be shook too. I learned later they'd been evacuated from our home due to concerns the tsunami would hit there as well. It's a constant reality along the coast, particularly at exposed places like Tofino and Pacific Rim National Park.

Although I had assembled all the necessary pieces to complete the totem, it still needed to be erected. Thankfully I connected with the Vancouver Aquarium, who saw it's potential to generate interest and enthusiasm for the Great Canadian Shoreline Clean-up. The Vancouver Aquarium, in partnership with the World Wildlife Fund and Loblaws, coordinates the program, which is celebrating it's 20th anniversary in 2013.

With help from their staff I erected the totem at the Vancouver Aquarium in June 2013. It's part of a larger exhibit entitled "From Garbage to Art".

I didn’t have a name for the piece until a story came out about it in the Canadian Press. The story was picked up on the Internet but leave it to the UK tabloids to coin the name “Float’em Pole”. Now why didn't I think of that!?

Although I do not represent it as such, I am sensitive that some viewers will perceive the Float’em Pole as a misappropriation of First Nation art. While I don’t apologize or seek permission for my work, I did approach two of my neighbours, Ucluelet Hereditary Chief Wilson Jack and Tla-o-qui-aht Elected Chief-in-Council Moses Martin, to ask for their personal endorsement and acknowledgement, which they have graciously provided. I am not aboriginal, and my art is not meant to be portrayed as aboriginal art. I have however, been strongly influenced by Indigenous art and culture, so it's often referenced in my work. Ultimately I hope the Float'em Pole is evocative, and stimulates the viewer emotionally, intellectually and creatively.